Snook - The Key Largo backcountry offers some excellent Snook fishing. The average size is 5 to 9 pounds and 24-34 inches. You will find them around bridges, mangroves, pilings just about any structure. They eat Mullet, Shrimp, Pilchards, Pinfish and a multitude of artificial lures or combinations of live and dead bait.

Redfish - Redfish love the warm waters of south Florida, the oyster beds, mangroves, and grassy flats are their regular haunts. They are prolific, and definitely not timid when it comes to eating - Which makes them a great sport fish for light tackle and fly-fishing. Redfish are often seen "tailing" (very similar to bonefish) on the shallow flats as they feed.

Seatrout - Seatrout are frequently targeted from December to April. When fishing for them you can use the old standby a popping cork rig with a shrimp or artificial hanging below the cork. Remember Pop the cork Sea Trout come to the gurgling sound the cork makes. Key Largo Sea Trout are found over grassy bottom and in the"muds" that is muddy areas where the bait is routing in the bottom stirring up shrimp and small fishes.

Bonefish (“Grey Ghost”) - Known for very fast and very long first runs, this is probably the species most synonymous with Florida flats fishing and Key Largo Fishing Charters. There is a reason why they are called "gray ghost of the flats" and are a real light tackle challenge. Here in the Florida Keys, Bonefish generally average in the 6 to 8 pound range with fish of 10 to 12 or larger not uncommon. They are usually fished in water less than two feet deep, and sometimes are seen so shallow that their tails and dorsal fins show as they root out food from the bottom. This is called "tailing" and is the most demanding of angler skills. Bonefish prefer water temperatures over 72 degrees, but can sometimes be found in slightly cooler conditions.

Tarpon (“Silver King”) - These incredible fish offer the ultimate in a shallow water big game fish. During the spring migrations, fish can average from 80 to over 150 pounds. They can be found rolling and feeding in deep Key Largo backcountry finger channels, in shallow grassy basins or along the edges of bars and flats in 4 to 6 feet of water. Tarpon tend to prefer water temps in the mid 70's for the channels and usually need 78-79 degrees for the flats. The big fish are here in good to excellent numbers from March through July and small tarpon 8-20 pounds are here year-round, disappearing during cold fronts in winter.

Permit - The permit is a very strong and hard fighting fish, averaging 8 to 16 pounds. Fish in the 20 to 35 pound range are common with fish to near 50 pounds showing fairly often. They seem to tolerate slightly cooler and slightly warmer conditions than the bones, and are also here all year with February thru November probably being most productive. Permit are usually found in waters less than 3 to 4 feet deep and will also float in channels or off flat edges in calm situations.

Sailfish Description: color dark blue on top, brown-blue laterally, silvery white underbelly; upper jaw elongated in form of spear; first dorsal greatly enlarged in the form of a sail, with many black spots, its front squared off, highest at its midpoint; pelvic fins very narrow, reaching almost to the anus; body covered with imbedded scales, blunt at end; lateral line curved over pectoral, then straight to base of tail.

Key Largo is connected to the mainland in Miami-Dade County by two routes. The Overseas Highway, which is U.S. Highway 1, enters Key Largo at Jewfish Creek near the middle of the island and turns southwest. Card Sound Road connects to the northern part of Key Largo at Card Sound Bridge and runs eastward to connect with County Road 905, which runs southwest and joins U.S. 1 at about mile marker 106. These routes originate at Florida City on the mainland. Key Largo is a popular tourist destination and calls itself the "Diving Capital of the World" because the living coral reef a few miles offshore attracts thousands of scuba divers and sport fishing enthusiasts. Key Largo's proximity to the Everglades also makes it a premier destination for a Florida keys Fishing Vacation including kayakers and eco tourists. 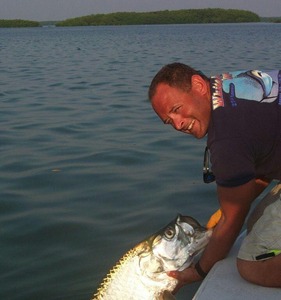 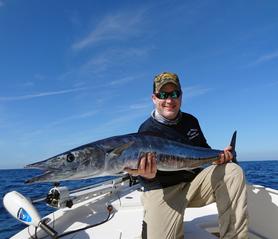 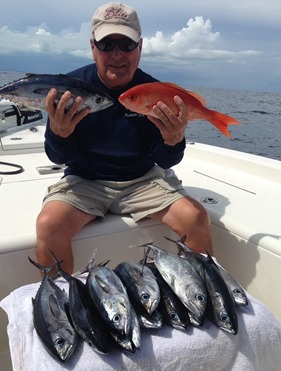 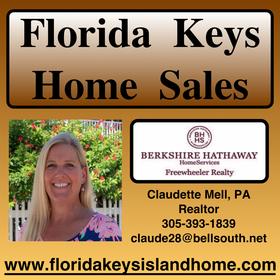